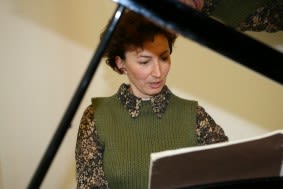 Finished Musical Education Faculty at the Academy of Music in Krakow in the conducting class of professor Ewa Michnik. She was afterwards employed at her alma mater as an accompanist, cooperating in the conducting class with Prof. Maria Kochaj, Prof. Józef Radwan, Prof. Stanisław Krawczyński, AP Ewa Mizerska-Golonek, SL Arkadiusz Basztoń. From scratch of her work at the Academy of Music in Krakow she cooperated with the scholastic academic choir of the Academy, taking part in preparing vocal opuses and large vocal/instrumental opuses. Currently she accompanies in the conducting class of APs with postdoctoral degrees: Maciej Tworek and Marceli Kolaska. Beside her academic work, she was employed as a choralist and a coach at the Polish Radio Choir and The Krakow Opera, taking part especially in baroque operas build-ups. She also cooperated with Karol Szymanowski Philharmony in Krakow, Capellae Cracoviensis and Cantores Cracovienses. During one and a half year long stay in Freiburg im Breisgau (Germany) she actively took part in Eric Ericsson’s choral workshops and, as an accompanist, in young German instrumentalists competition (flute and bassoon class). She was a member of a vocal sextet “In Tune” performing and recording arrangements of jazz and classical music pieces. She also cooperated with the Ludowy Theatre in Krakow and took part, as a pianist, in the Stage Songs Review in Wroclaw. After 2000 she cooperated as a pianist (duetting with Monika Płachta), with Jan Łukaszewski and Polish Chamber Choir Schola Cantorum Gedanensis, performing song cycles Liebes Lieder and Neue Liebes Lieder by J. Brahms, in Krakow and Gdansk.