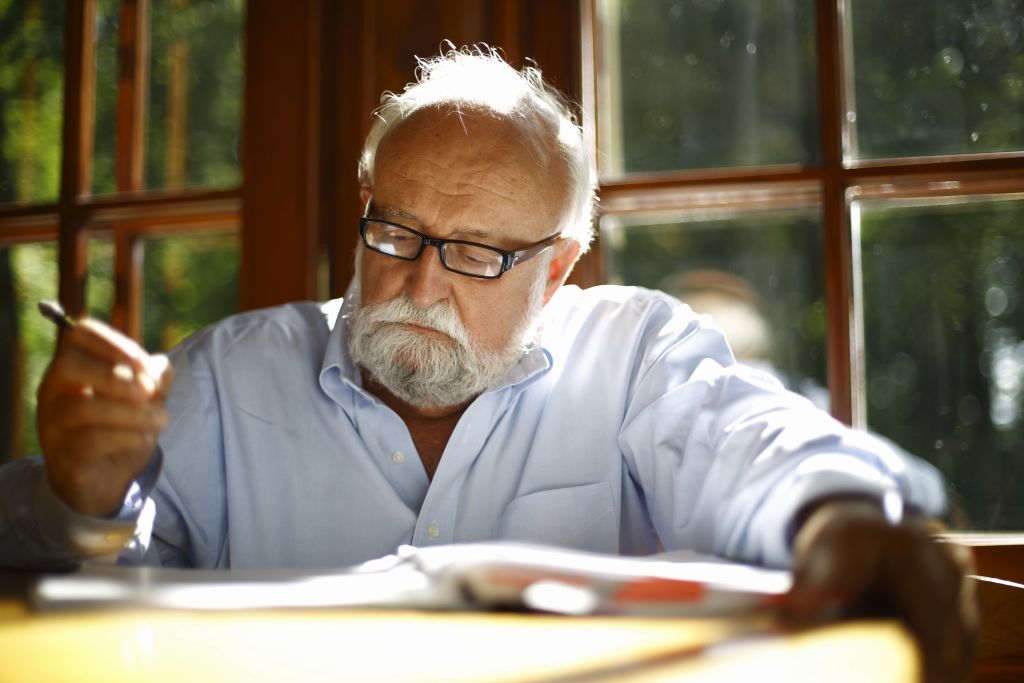 We are proud to have had the privilege of living and working with Maestro Krzysztof Penderecki. Many of us had the opportunity to draw on his extraordinary experience in personal contact with him, during lectures and meetings, and above all in active contact with his work and reflection. The Professor's outstanding works captivated the attention of the whole world and entered the canon of European music permanently, shedding light on the phenomenon of the Polish school of composition and attracting young people from many countries and continents to the Krakow Academy.

Legendary composer of outstanding oratorio and symphonic works, conductor; born in 1933 in Dębica, a student of F. Skołyszewski, A. Malawski and S. Wiechowicz. In 1959, as a relatively unknown young composer, he won 1st, 2nd and 3rd prizes at the Young Composers’ Competition of the Polish Composers’ Union: for Strophes (Polish: Strofy) for soprano, reciting voice and 10 instruments (1959), Emanations (Polish: Emanacje) for two string orchestras (1958-59) and David’s Psalms (Polish: Psalmy Dawida) for mixed choir, string instruments and percussion (1958), which opened the way to a stunning artistic career. In 1961, he received the award for Threnody “To the Victims of Hiroshima” (Polish: Tren „Ofiarom Hiroszimy) for 52 string instruments (1959-61) at the UNESCO International Rostrum of Composers in Paris; in 1962, the first prize for Canon (Polish: Kanon) for 52 string instruments and a tape recorder (1962); twice the Prix Italia: in 1967 for Passio et mors Domini Nostri Jesu Christi secundum Lucam for 3 solo voices, reciter, 3 mixed choirs, boys’ choir and orchestra (1963-66); and in 1968, for the oratorio Dies irae for 3 solo voices, mixed choir and orchestra (1967). A recipient of countless awards and distinctions in many countries and of nearly 30 honorary doctorates awarded by universities from all over the world. Initially recognised as the author of outstanding works representing the so-called Polish sonorism of the 1960s, then also as the composer of great vocal and instrumental works (including Passion, Utrenia, Polish Requiem, Credo) (Polish: Pasja, Jutrznia, Polskie Requiem, Credo), stage works (The Devils of Loudun, Paradise Lost, Black Mask, Ubu Rex) (Polish: Diabły z Loudun, Raj utracony, Czarna Maska, Ubu Rex) and symphonies. There is also another, passionately cultivated current in K. Penderecki’s work, namely chamber music.

While being a citizen of the world, Professor Krzysztof Penderecki always remained faithful to Poland and to Krakow. In a very special way, he was loyal to his alma mater, the Academy of Music in Kraków, and its Department of Composition. He proved it many times, both in his speeches and in his actions, supporting the Academy with his name and authority in difficult moments, conducting performances of his works with joint academic ensembles, extending his personal patronage to competitions and the most important artistic projects. For over 60 years he was associated with the Academy as a professor, honorary doctor, head of the Department of Composition, and in the years 1972-87 as the Academy’s Rector.