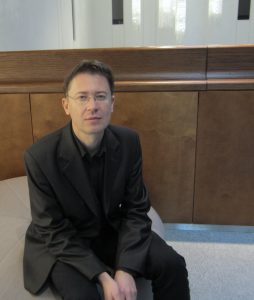 Born 1973 in Krakow, he graduated from the Academy of Music in Kraków in the organ class of Prof. Jozef Serafin (2000; a diploma with honours). A prize winner of number of national and international competitions, he carries on lively concert activity in Poland and abroad: performances in France, Germany, Austria, Switzerland, Italy, as well as in Russia, Mexico and Brasil. In 2001-2007 closely collaborated with the Capella Cracoviensis ensemble, playing solo parties as well as organo obbligato and basso continuo in numerous concerts.

Specialized in performance of French Neo-Romantic symphonic organ during his post-diploma studies with Prof. Magdalena Czajka at the Frederic Chopin Academy of Music in Warszawa (2002/2003). Continued his post-diploma studies in the class of organ of Thomas Schmögner (2003/2004,  studies in Ferenc Liszt’s organ music) at the Vienna Conservatory, presently Privatuniversität Wien.

In 1997 graduated also from the Jagiellonian University in Kraków, where in 2002 received PhD at its Faculty of History. Presently he is professor at Organ Department at the Academy of Music in Kraków, leading classes in organ playing, chamber music and basso contionuo (being a specialist in ancient, especially baroque music he wrote in 2006 the habilitation dissertation devoted to performance issues of Iberian organ music of the 17th century). In 2014 fulfilled postgraduate studies Master of Business Administration – University Management at the Adam Mickiewicz University in Poznań.