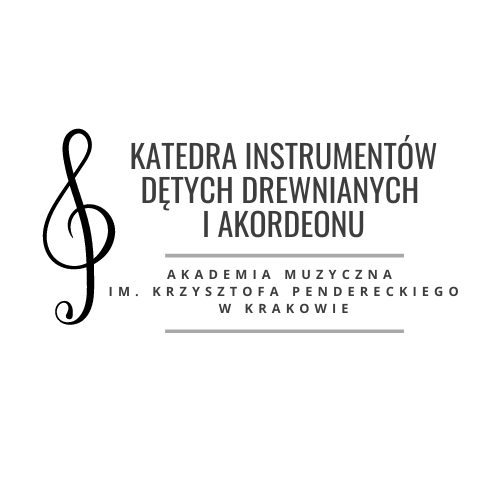 The wind instruments and accordion courses taught at the Kraków Conservatoire from 1918 were interrupted by World War II. After 1945, the State Higher School of Music was established, but everything had to be organised almost from scratch. The first teachers after the war were the concert masters of the Krakow Philharmonic groups – flautist Wacław Chudziak, trumpeter Ludwik Lutak, and percussionist Józef Stojko. Only at the end of the 1960s did things gain momentum. In the academic year 1969/70, the flute, oboe, clarinet, bassoon, trumpet, French horn, trombone and percussion classes formed together the Wind Instruments Department. Associate Professor Ludwik Lutak became its first head. In 1975/76, saxophone and accordion classes were additionally included in the Department. The classes of each of the instruments kept developing and expanding. The Department’s pedagogues were recruited from among the alumni of the State Higher School of Music, and subsequently the Academy of Music, the musicians of the Polish Radio and TV Orchestra in Krakow, Krakow Philharmonic, and later also the Great Orchestra of Polish Radio and TV in Katowice (currently the Polish Radio National Symphony Orchestra (NOSPR)). The opening of the Instrumental Pedagogy Section in 1976/77 was of great importance to the teaching of wind instruments at the undergraduate level. In 1981/82, Professor Barbara Świątek-Żelazna took over as head of the Department. The development process of the academic staff began. In addition to their teaching activities, each of the members of the Department had an impressive concert record; students began to win prizes in competitions in Poland and abroad. At present, 22 instrumental classes are taught at the Department in the following specialities: the flute, oboe, clarinet, bassoon, saxophone, French horn, trumpet, trombone, tuba, percussion, and accordion. The Department also conducts scientific and research activities. Numerous seminars and master classes are given by foreign specialists. The international scientific sessions that are held combine performing arts with scientific analysis, which is quite a unique feature. Also noteworthy is a multi-year research programme concerning music by Krakow composers for wind instruments, percussion and accordion, a session entitled “Contemporary National Schools?” devoted to the music of Switzerland, Ukraine and Finland, and a session on the accordion music of Scandinavia, Latvia, the Czech Republic and Slovakia. For several years now, the Department has been collaborating with the Contemporary Music and Jazz Department organising a percussion “Sources and Inspirations” festival. The year 2007 saw the first in a series of sessions and concerts entitled “On the Road to New Harmony” devoted to new compositional and performance techniques in ensemble music for wind instruments, percussion and accordion. The Department was an inspiration for that project – Zbigniew Bujarski’s “Games” were created especially for its musicians. The first performance of that work gave rise to the formation of a new ensemble, the “Harmonia Nova” wind instruments orchestra. The open formula of that project provides new possibilities for creators and performers for many years to come. In 2008, to celebrate the 120th anniversary of the Academy, on the initiative of the Department, works for various wind instrument ensembles were written by composers associated with the Academy and were subsequently performed. Those compositions will be published by the Academy.

What is the Department’s greatest undertaking is the International Flute Competition, launched on the initiative of Professor Barbara Świątek-Żelazny. In 2010, it will be held for the fifth time.
The Wind Instruments, Percussion and Accordion Department of the Academy of Music in Kraków conducts artistic and scientific activities relating to music for wind instruments, percussion and accordion in the following fields of research:

The teaching activity of the Department focuses on the comprehensive development of the students’ artistic personalities, preparing them for performing as musicians/instrumentalists and for carrying out independent scientific work and pedagogical work.

The main purpose of the Department’s organisational activities is to ensure conditions for the scientific, artistic and educational work of the staff and students and for the presentation of their individual and team achievements by organising:

The Department’s regular events include: