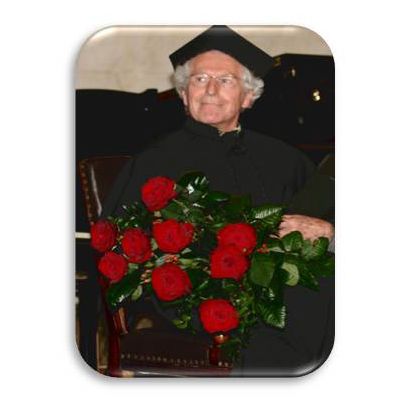 Peter-Lukas Graf was born on January 5, 1929 in Zurich. At the age of 9 he began his musical education with playing the flute. First, he studied with Margaret Isler, who got him acquainted with the works of Bach, Händel, Mozart and Debussy. Next, he studied for three years with André Jaunet.

After his matriculation in 1947, Peter- Lucas Graf entered the Conservatoire National in Paris, where he studied with Marcel Moyse and Roger Cortet. In 2001 he recollected: “What I owe most to my flute masters are the love of music and my fascination with the flute” (“Falaut”). He got to know Paris and attended concerts; at that time he met the young Jean-Pierre Rampal. He was a diligent student and graduated from the flute class of Marcel Moyse receiving the highest prize Premier Prix in 1949 whereas in 1950 he obtained a diploma in conducting in the class of Eugenie Bigot. For the following three years he studied conducting in Munich. He was appointed the youngest principal flutist at the Winterthur Symphony Orchestra.

At the age of 24 he won the 1st prize at the International Competition ARD in Munich (1953), and a few years later – Bablock prize at the H. Cohen International Music Award in London. Since then he has given concerts all over the world, in Europe, America, Israel, Australia, Japan and Russia. Many of his performances have been recorded for the radio and television. The artist has cooperated with renowned orchestras and soloists. With time Peter-Lukas Graf began his activity as a conductor. In the years 1961-66 he led the Lucerne State Theatre Orchestra and cooperated with Swiss orchestras as guest conductor.

Is spite of his great passion for conducting, Peter-Lucas Graf decided to turn to teaching. From 1973 he led the class of flute at the Academy of Music in Basel. His achievements as a teacher gave him enormous satisfaction and brought recognition. He has been invited as a member of the jury to renowned flute competitions, such as the one in Kraków. Peter-Lukas Graf has led International Flute Masterclass in Gdańsk and Poznań. He has been a frequent guest at famous music festivals in Salzburg, Lucerne and Edinburgh. He is an author of studies for flutists, a book entitled Interpretation, an editor of numerous scores for flute with piano or guitar accompaniment.