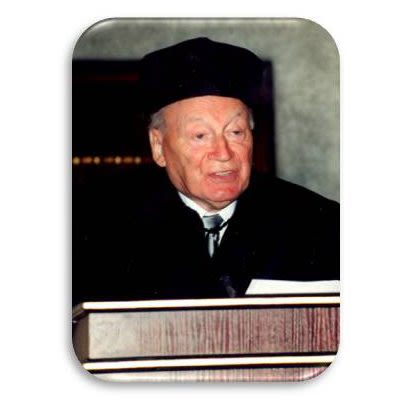 A musical service – a service understood not only as a diligent fulfilling of one’s tasks, but also as a manifestation of love and devotion. This deeply emotional attitude to music characterized the entire wonderful life and artistic path of Paul Sacher. “Art demands passion” – he used to say and the passion permeated all his activities, filled them with dynamism and grandeur. He was not a composer but equally to the composers, whose most faithful friend he remained, he was an artist; everything he achieved, organized and inspired has become a significant part of the 20th century history.

Paul Sacher was born in 1906 in Basel – a city with rich musical traditions that reached back to the middle ages. There, he studied musicology at the University and conducting at the Conservatory. In 1926 he founded the Basel Chamber Orchestra. From the beginning of his work as a conductor, Paul Sacher realized a brave and original repertoire concept, which he later consistently maintained and developed. The concept was based on almost complete elimination of the omnipresent 19th century music and on turning on one hand to the sphere of early music that had fallen into oblivion and on the other putting great emphasis on contemporary music represented by dozens of composers from Stravinsky to Lutosławski. He never aimed at specialization because he believed that closing within a single stylistic sphere is a limitation for the artistic sensitivity of performers and listeners alike and that it inevitably leads to the narrowing of horizons.

During numerous concert tours he visited Great Britain, Canada, Japan and Australia. As a conductor he regularly performed in the most important music centers in Europe as well as at festivals such as Aix-en-Provence, Edinburgh, Luzerne and Vienna. Among the soloists with whom he cooperated were such historical figures as Pablo Casals, Dinu Lipati, Mstislav Rostropovich.

A separate chapter in this extremely rich biography, however closely connected with his activity as a conductor, could be entitled: “Paul Sacher – Great Patron of the Arts”. For the 20th century composers he was a unique figure. Making use of considerable financial resources that he had at his disposal owing to his family lineage, he commissioned dozens of works and ensured their premiere performances. Sacher was not a proponent of a chosen trend in contemporary music and he did not reject anything a priori. He based his choices on various factors: intuition, common sense but also on personal liking, sometimes he was influenced by the spirit of the time – all this made the collection of scores commissioned by Sacher unusually vivid.

In 1973 the Paul Sacher Foundation was established. Its purpose was to gather and preserve the “by product” of Sacher’s activity as a conductor: scores, books and documents. Soon the collection began to expand as valuable materials were handed down by composers or their inheritors. Today the Paul Sacher Foundation is an internationally recognized institution; it grants access to the documents to scholars, it founds scholarships for research projects and organizes exhibitions. The Foundation is a continuation of long lasting activities promoting the music of our times and today it already is part of that legacy.