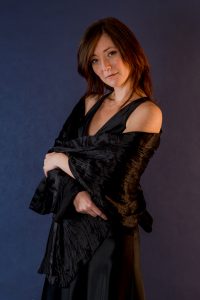 A pianist raised in Lviv, where  she gained first musical experiences at the Krushelnytska Specialist Music School (equivalent of a Talent School). She completed the course in 1996 receving a Gold Medal – the highest award .
A graduate of the Krakow Academy of Music (Master of Music diploma, class of prof. Janina Baster, 2002) she continued her education at the Academy, receiving a Postgraduate degree with the highest marks in piano chamber music (Piano Duet).
She is a valued accompanist, playing at master classes led by Professor Alison Pearce (Royal Academy of Music in London), Professor Marcin Habela (La Haute Ecole de Musique de Genève), Maciej Pietraszko (NYC Opera), assisting at the Krakow Philharmonic orchestra exams, as well national and international  music competitions.
She teaches piano (Primary and Secondary Public Music School in Wadowice), and  participates in numerous concerts and festivals in Poland and abroad (Ukraine, Germany, France, Scotland, Czech Republic).
As a recitalist and chamber musician, she has cooperated with both the Krakow and Rzeszów Philharmonic.
She works with singers and instrumentalists, performing a variety of works from many genres and epochs, including new music (premieres of works by M. Jablonski).
Since 2001 the pianist closely cooperates with the Krakow Philharmonic Education Department, serving as co-creator, performer and music director of educational programs and concerts for  the young audience.
Since 2013 she has been working as an accompanist at the Voice and Drama Department of the Academy of Music in Krakow.