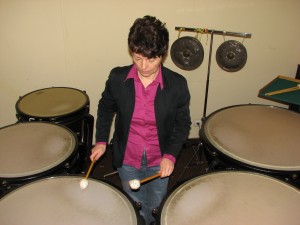 Graduated with distinction from the Academy of Music in Kraków in 1985. She attended the percussion class conducted by Stanisław Welanyk. Since 1983 she has been cooperating with the Cracow’s Percussion Group by taking  part in the first performances  and  recordings of the new compositions and by performing both in Poland (including “Warsaw Autumn” several times) and abroad (including Amsterdam, Berlin, Dresden, Bratislava, Prague, Lvov and the “Musica Viva” festival in Munich). She was a soloist musician in the Krakow Opera (1985 – 1992) and took part in the ballet spectacles and performances from the world’s biggest opera repertoire, such as Ubu Rex and Black Mask operas by K. Penderecki.  Since 1986 she worked as a soloist musician it the Polish Radio and Television Orchestra in Cracow (now Radio Symphony Orchestra), with which she performed in Poland and abroad, including “Warsaw Autumn”, Wratislavia Cantatas, Poznan Spring, Viva il canto festivals, as well as  in Sweden, Germany, France, Spain, England, Italy, Switzerland and Austria. She participated in a great amount of contemporary composers’ first performances of their work. She took part in the recordings for the PRiTV and record companies: Polskie Nagrania, Tonpress, Veriton, Wizon, CONIFER RECORDS LONDON, VIENNA MODERN MASTERS, ACCORD MUSIDISC, BMG. In January 1995 she played with the Cracow Radio Orchestra, supporting L. Pavarotti during the concert in Lima. Currently she is cooperating with the Cracow orchestras – Philharmonic, Opera, Capella Cracoviensis,  Simfonietta Cracovia. She is conducting workshops and open classes for young musicians and, what is more, she is working as a member of    a jury during contests and auditions; she is the organizer of the Myslenice Percussion Confrontations.  Since 1999 she has been a lecturer at the Academy of Music in Krakow.