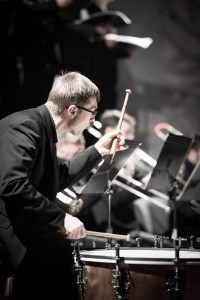 Born in Wadowice in 1969, but the citizen of Andrychów. He finished with distinction the Music Secondary School, named of S. Moniuszko, in Bielsko-Biała, where he studied percussion under MA L. Sojka. In 1994, he graduated from the Music Academy in Kraków, where he studied percussion under PhD S. Welanyk. In 1990-2000, he cooperated with Kraków Percussion Group (contemporary music festivals in Kraków, Opole, Poznań, Bratislava, Berlin, and Prague). As the member of the band “Overtime” he got the second prize at Jazz Juniors Festival in Kraków in 1990. He took part in the International Percussion Competition ARD in Munich in 1991. He has been the member of the chamber orchestra Capella Cracoviensis since 1992. He works as a lecturer with the title of assistant-professor at the Faculty of Contemporary Music, Jazz and Percussion in the Music Academy in Kraków. He cooperates with the Philharmonic Orchestra in Kraków, Beethoven’s Academy and also Sinfonietta Cracovia. He has played world premieres of works by D. Eddleman and M. Stachowski (Kraków Percussion Duet). Particularly close to him are the percussion works by K. Moszumańska-Nazar, A. Walaciński, A. Panufnik, , A. Krzanowski, or A. Kaczyński, which he played a lot of times at festivals at home and abroad. M. Mengjiqi , D. Eddleman and N.Husni dedicated their works to him. He is a co-founder and member of the chamber groups/bands: Barock Tunes and Alta Capella (wind and percussion historical instruments). In 2000, he played at Asian Culture Festival in Niigata, with the world-famous cellist Yo-Yo Ma and Maria Pomianowska and Michał Kulenty, in Silk Road project. He gave concerts in many European countries and also in the USA, Japan, South Korea and Taiwan. He recorded several dozen CDs with classical, contemporary, ethnic music and sung poetry as well. He plays the instruments made by Bergerault and Lefima. He uses sticks and mallets made by Pro·Mark.