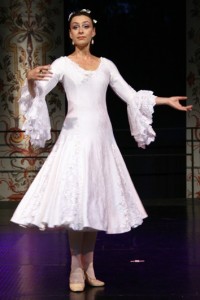 Romana Agnel is a dancer, choreographer, dance teacher, art historian, and founder of ‘Cracovia Danza’, the only professional Court Ballet in Poland (formerly known as ‘Ardente Sole’), a Municipal Institution of Culture in Krakow, where she is Executive and Artistic Director.
She is an alumna of the Community Ballet School (studio of Prof. Marta Mirocka) in Krakow. She completed a degree in Art History at the Sorbonne in Paris. In France she became acquainted with the dance of several dozen nations of the world and acquired her specializations in the areas of character dance and historic dance (‘Le Ballet Légendaire d’Ile de France’, ‘Le Bal Paré’, the 7th conservatory in Paris, ‘Théatre Baroque de France’).
She is also a dancer of the Bharata Natyam classical Indian dance which she learnt from Smt. M. K. Saroja in Madras.
Romana Agnel has had many occasions to work with illustrious personalities of the music and ballet worlds. She created choreographies for numerous Baroque, classical, and Old Polish operas staged in Poland and abroad. She has participated in the production of performances under the direction of Jean-Claude Malgoire. She has also presented historical dance with the accompaniment of superb soloists: E. Stafańska, U. Bartkiewicz, harpsichordist K. Weiss, and Baroque cello virtuoso J. Ter Linden.
Romana Agnel created the choreography of the performances staged in many theatres ( e.g. The Juliusz Słowacki Theatre, Krakow, Poland; The STU Theatre, Krakow, Poland; The ‘Ludowy’ Theatre, Krakow, Poland; The ‘Groteska’ Theatre, Krakow, Poland; The Kazimierz Dejmek New Theatre of Łódź, Poland; The ‘Rampa’ Theatre of Warsaw, Poland) as well as in opera houses and music theatres (e.g. Atelier Lyrique Theatre of Tourcoimg; Champs Elysées Theatre of Paris, France; ‘Konserwatorium’ Theatre of Oberlin, USA; ‘Concertgebouw’ concert hall in Amsterdam, Netherlands; The Margravial Opera House of Bayreuth, Germany; ‘Pod Palmovkom’ Theatre of Prague, Czech Republic; Warsaw Chamber Opera, Poland; The Krakow Opera, Poland).
She also cooperated with the outstanding musicians and conductors (e.g. E. Stefańska, U.Bartkiewicz, M. Pomianowska, K. Baumann, T. Karolak, Wł. Kłosiewicz, V. de Kort, J. – C. Makgoir, J. Ter Linden, S. Stadler, S. Standag, K. Weiss) as well as the directors (J. Stokalska, L. Adamik, A. Carré, K. Dejmek, Wł. Nurkowski, J.Polewka, R. Peryt, A. Weltsch, G. Wiśniewski, K. Zanussi).
Romana Agnel is the creator of the great majority of the choreographies of ‘Cracovia Danza’ Court Ballet performances. She is also the originator and the artistic director of ‘Cracovia Danza’ Court Dance Festival, which is held yearly in August in Krakow, Poland.
Besides, she regularly conducts the dance classes at the Academy of Music in Krakow and the Academy of Music in Łódź as well as courses and lectures within her specializations.
The artist has been promoting for years the classical Indian dance Bharatha Natyam in Poland and abroad and she is also the ambassador of Polish and European dance in India.

She is also author of a few publications on the subject of historical dance, amongst others:
1. ‘The Importance and Meaning of Gesture in the Opera and Ballet of the 17th and 18th centuries’ [in:] Improvisation in the music of the Baroque, ed. M. Zieliński, the Academy of Music in Bydgoszcz, Bydgoszcz 2004.;
2. ‘The Basic Forms of Court Dance in the Baroque’ [in:] Around Baroque Dance, ed. P. Grajter, the G. and K. Bacewicz Academy of Music in Łódź, Łódź 2007.;
3. ‘Several remarks on the Wawel Castle court dance during the Golden Age’ [in:] catalogue of the ‘Dance in Krakow’ exhibition prepared by ‘Cracovia Danza’ Court Ballet as a part of celebration of 750th anniversary of the location of the City of Krakow that took place during the 13th ‘Cracovia Danza’ Court Dance Festival, ed. H. Pietrzak, Krakow, 2007.
4. ‘The Origins and the Symbolism of the Polonaise’ [in:] Vom Schäferidyll zur Revolution. Europäische Tanzkultur im 18. Jahrhundert. 2. Rothenfelster Tanzsymposion ed. U. Schlottermüller, H.Weiner, M. Richter, Freiburg 2008.

Romana Agnel received 2nd Prize at the Parisian ‘La Scéne Française’ competition in the area of character dance technique and was honored with the Zofia Rayzacher Prize at the 9th Early Music Festival at the Royal Castle in Warsaw. In 2009 she was distinguished by the Minister of Culture and National Heritage with the ‘Merit of Polish Culture’ award and the Medal of the National Education Commission by the Chief Education Officer in the Małopolskie Region. In 2010 she received the ‘Honoris Gratia’ award for meritorious service to the City of Krakow and its inhabitants from the Mayor of the City of Krakow. In 2014 she received the Silver Cross of Merit, awarded by the President of the Polish Republic.