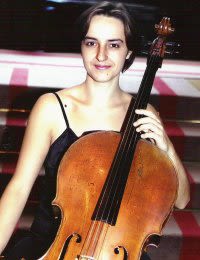 She began musical education in her native Tarnów, Poland, where she attended the local State Primary School of Music. Subsequently she graduated with honours from the State Secondary School of Music in Tarnów. Throughout her primary and secondary education she was a member (a cello leader) of both Children’s and Youth Chamber Orchestras, with which she toured many European countries and performed at festivals both home and abroad.
She completed her tertiary education with excellent grades at the Faculty of Instrumental Music, Academy of Music in Kraków, in the cello class of Professor Witold Herman. Throughout her studies she participated many times in Helmuth Rilling’s classes organised by the Bach Academy (Kraków and Stuttgart) and in the Summer Music Academy in Pommersfelden, Germany. She was awarded three annual scholarships by the Polish Ministry of Culture and Art.
In 2000 she obtained a postgraduate degree in the Melos Quartet’s chamber music class and in Professor Peter Buck’s cello class, in 2002 a Solistenklasse diploma in the same class, and in 2004 a Solistenklasse diploma in the string quartet class at the Staatliche Hochschule für Musik und Darstellende Kunst in Stuttgart, Germany. In October 2002 she was awarded the Third Prize in the cello category at the International Competition of 20th and 21st Century Music in Rome, Italy.
Since 1993, Anna Armatys-Borrelli has been a member of the Dafo String Quartet, with which she has received numerous awards at international music competitions, including the First Prize and Special Award at the Bacewicz Chamber Music Competition in Łódź, Poland, in 1995; the First Prize at the Valentino Bucchi Competition of 20th-Century Music in Rome in 1995; the First Prize and Special Award at the Penderecki International Contemporary Chamber Music Competition in Kraków in 1997, the Second Prize and Special Award at the International String Quartet Competition in Cremona, Italy, in 1998; the Second Prize at the International String Quartet Competition in Bubenreuth, Germany; the First Prize in the string quartet category at the Nationwide Chamber Ensemble Competition in Katowice, Poland, in 1998; the Third Prize at the Zinetti International Chamber Music Competition in Sanguinetto, Italy, in 1999; and a Special Jury Award at the Joachim International Chamber Music Competition in Weimar, Germany, in 1999.
She has recorded numerous CDs with the Dafo String Quartet, many of which have received music awards. Recorded for the DUX/PWM label, their two albums Polskie kwartety XX wieku [Polish String Quartets of the 20th Century] received two Fryderyk Awards in 1999 and 2001, respectively. The ensemble also recorded a CD for the Robert Bosch Foundation/SWR label featuring string quartets by Szymanowski, 2nd String Quartet by Górecki and String Quintet in C Major by Schubert (the latter recording was performed by the Dafo String Quartet with the Melos String Quartet cellist Peter Buck). In 2010 they released Penderecki String Quartets, String Trio Clarinet Quartet, an album featuring all chamber works by Penderecki, including the world première recording of Penderecki’s 3rd String Quartet. The album was awarded the Supersonic Pizzicato Prize for a unique chamber music recording from the Luxembourg-based music label Pizzicato. In 2011, the Dafo String Quartet recorded a CD/DVD entitled Live Łukaszewski & Bembinow in collaboration with the Puelle Orantes Girls Choir. Their Kolędy i pastorałki [Christmas Carols] received a Golden DVD from the Polish Society of the Phonographic Industry and a Fryderyk award in 2011.
As a soloist and chamber music performer she has appeared in many prestigious music festivals in Poland and abroad, and she has also performed both for radio and television. From 1992–1996 she was a cello leader in the Tarnów Chamber Music Orchestra, and she has also collaborated with numerous chamber music ensembles throughout Europe. Anna Armatys-Borrelli’s repertoire encompasses several hundred works ranging from duets to music composed for large chamber ensembles.
From 1996–2002 she worked as an Assistant Lecturer at the Chair of Cello and Bass, Academy of Music in Kraków, and from 2002 she worked as a Lecturer there while collaborating with the Chair of Chamber Music. Since 2012 she has been working at the Chair of Chamber Music exclusively. In 2013 she was awarded the title of Associate Professor and Habilitated Doctor and was appointed Head of the Department of String Chamber Music. From 2007–2010 she ran the cello class at the Conservatorio di Musica “Domenico Cimarosa” in Avellino, Italy, and since 2010 she has been running a similar class at the Conservatorio di Musica “Alfredo Casella” in L’Aquila, Italy.